Charlie Murder is the one of the five playable characters and is the main protagonist in the game Charlie Murder.

Charlie, despite being the central protagonist, is not of any sort of noble or heroic character. The success of his band had gone to his head and he forgot about what was really important. We see this by him doing things like screwing over his lifelong friend Paul and discarding and forgetting him the second his band becomes successful, and even vandalizing a hotel room which also results in Paul's guitar being destroyed.

The debacle at The Fall nightclub is blamed on the Band's pyrotechnic display, and as a result Charlie and company are ruined. Drowning their sorrows in alcohol, they become easily taken down by Gore Quaffer and left for dead, leading to the start of the game

Charlie is very goal-orientated and doesn't always stop to think about the consequences that come with getting what he wants, including losing his friends. He wishes to be better and to be the heroic protagonist he's supposed to be, but it's difficult. He wants to be a good, caring person but he doesn't know how to start.

He cares deeply for his friends, but doesn't know how to fully show his emotions, which leads to his downfall. Power gets to his head but eventually he learns to do what's right. In practice, he's a good person, but he needs to work on how to do the 'right thing'.

-Shield of Scream: Buff everyone's defense for a bit.

-Mind Slaver: Enslave a baddie to fight as your minion.

-Cyclone: Whip weapons+gibs into a cyclone of pain!!!1

-Goliath: Summon a Goliath from the netherlands.

-Underling: Summon a minion from the netherlands.

-Safety Shield: Surround yourself with a shield of pins.

-Echo: Gives your next magic no cooldown.

-Heal: Recover your health for a bit.

One of Ska Studios' Valentine Cards Featuring Charlie and the Band 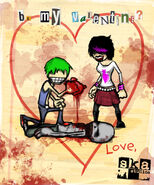 One of Ska Studios' Valentine Cards Featuring Charlie and Kelly
Add a photo to this gallery
Retrieved from "https://charlie-murder.fandom.com/wiki/Charlie_Murder_(Character)?oldid=5965"
Community content is available under CC-BY-SA unless otherwise noted.